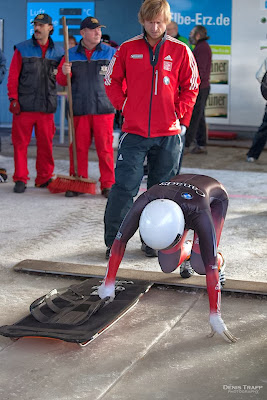 While this entry has taken some time to come together for me, the fact is that time is exactly what we all need in life when things don't go quite as planned.

So, while I know I don't need to apologize for the delay in posting, all the same, I wish to send a heart felt "Thank-You!" to every single human being who has taken a moment: to tell me they care; that they believe in me, to send positive vibes, to say what I've wanted to hear, and especially to those of you who have said all the things I needed to hear (but maybe didn't want to - at first).

For as long as I can remember I have been known to do things in my own unique way. I recall numerous instances where my parents could be heard saying, "You must really like to do things the hard way, huh!?"

I can attest to their belief though - I even have two major scars on my face because of such actions.
One  - very close to the outside edge of my right eye. The other - just off-centre, at the top of the bridge of my nose.

Both incidents were preceded with a single warning, "Cassie, don't do that!" ... I did it anyway.

Sure, this could all be labeled as "poor listening skills" or "a flare for the dramatic" neither of which I can deny I've been found guilty :) but the truth is, this has always had more to do with a deep rooted desire to find out for myself, to know for sure; to leave no question lingering in my mind.
Therefore, whether the discovery includes a parting gift of a scar or not -  I have grown stronger because of it; not in spite of it - every single time.

Trust and clarity. That's all there is.
The last race I re-capped was the Calgary, Alberta World Cup. I learned a great deal that week; I grew stronger.
Our next stop was Park City, Utah: World Cup #2. A track I really enjoy and even placed 4th on last WC season. I came out of the gates with a heart filled with strength, and a mind grounded in belief. Run 1 didn't have the push I expected, but demonstrated an ability to drive I have shown many times before - I was sitting in 7th. 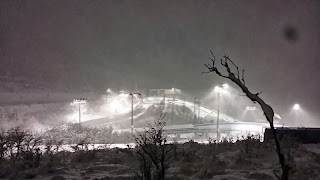 Building on that run, with as many tools as I felt I needed, I returned to Phrixus at the start ramp. I put it all on the line. My legs still weren't moving like I knew they could - but I began piecing together a run I was pleased with. Unfortunately, a grave error out of one corner caused an aggressive hit in the next and the domino effect on our speed was permanent. I crossed the line - and dropped 5 spots.

They should tell you when you're born: have a suitcase heart, be ready to travel. - Gabrielle Zevin

Ultimately, I knew right away what this mistake had caused - and the next 48 hours were a bit of a  blur, but this life I've chosen moves faster than fast, and I took comfort in the fact that I was still at the helm of my own ship.

The simple truth of my sport is that we don't race each other - we race the track; we race the clock.

I was formally told I would be sent down a tour, to race on the Inter-continental Cup (ICC) and by

The hardest part? Well, it wasn't the adjustment to 8 timezones in 14 hours -- it was hugging my team and support staff g'bye at the airport in Montreal.

Quickly altering my sleep patterns and getting my brain ready for 17 corners of German engineered speed - I wrapped up my 6 training runs on a track I had only slid once last year and promised myself to constantly and actively live in the moment.

It's not a dream anymore; it's worth fighting for. -Paramore

The first race showed me just where I needed to make adjustments both on and off the ice.
Sure, I pushed personal-bests, but ultimately I made too many mistakes down the track to earn myself a top spot. I finished 9th; it was a tough pill to swallow ... but the ICC does back to back double races; the next day was another chance to get it right. 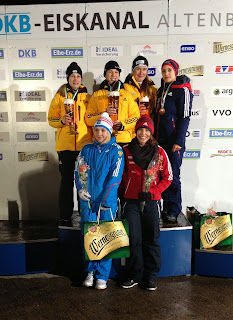 Race #2 saw me approach the starting block as yet another track record had been set by a German slider - they know their home tracks - but it signalled to me that the ice was fast, and I could taste my desire for speed. I maneuvered those fast transitions with all the confidence I had built that week and crossed the line tied for 5th.

When I was called to lay down my final run, I pushed a huge PB - I knew without having seen the time it had been technically solid - the drive lines I was executing were great, and again - I knew it. I can tell you this all now, but I promise - there's no time to consider these things when you slide. I entered the huge 360 degree corner with more speed than I'd felt all week, and I just missed my timing on the first steer. However, a small miss at a crucial moment (as I have demonstrated in the past) can be brutal. I exited the corner on the side of my body. As quickly as I could - I put us back on track, but once again - killed our speed. I finished the race in 6th place. 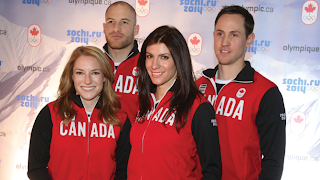 There was very little physical time between the end of my racing, my return to Calgary and the Wednesday, December 18th official: Canadian Skeleton 2014 Olympic Team announcement.

I had known I would now be battling for/to be named the 3rd Canadian Olympic sled for a couple of days before the media, and despite what you might expect, my initial reaction was not anger and frustration; instead, with tears in my eyes - I could only find heart wrenching disappointment. Sure, that little voice has tried to urge me to go to a place where negativity and questions swirl around me like a storm: but I anchor myself in the white noise and hear only the words of one single answer: it's not over!!! And please allow me to emphasize that statement with as many virtual exclamation marks as you may need - because it is of the utmost importance.

I started this journey with blind faith, and through my ups and downs I have endured. I'm not about to start letting adversity get in the way of my success now. 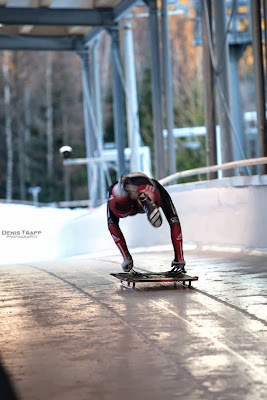 The past week, pre-holiday turkeys and treats, my incredible teammates and I have been pushing and jumping and lifting and laughing our way through 4-hour morning to afternoon workouts. Each one of us knows the hard-work isfar from over, and we are aligned in our promise to go the distance with every inch of strength that remains.

After the quick break, we can ring in the new year as the World Cup will head over to Europe: taking on single races at each of the following venues: Winterberg, St. Moritz and Igls; while I stay on North American soil with the ICC team to attack two weeks of double-races at both Whistler Sliding Centre (Jan 2-6) and Park City, Utah (Jan 8-12) respectively.

Who knows, this journey just might be happening exactly in the "unique-way" I need.

It's hard to beat a person who never gives up. - Babe Ruth