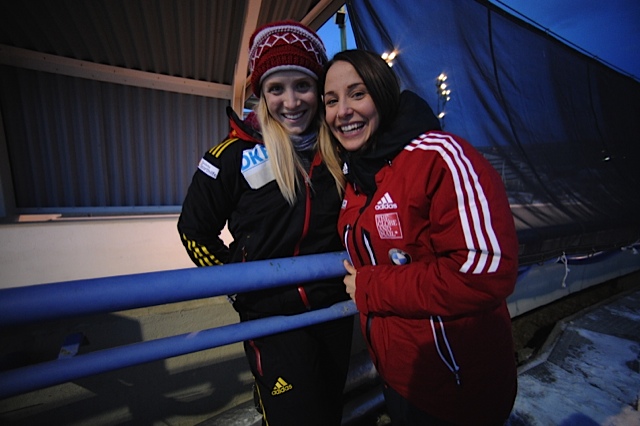 Allow me to begin this entry with a Happy Christmas or perhaps Happy Hanukkah, or bright, sparkly wishes for any other multinational celebration that you and your family celebrated this month - and to round it out, "Merry Festivus to the rest of us!" :)

Now then, to fill in the missing gap from the last couple of weeks lets talk about ICC Race #4 in Winterberg, Germany, and a final week forerunning for the World Cup back in Calgary!

As promised in my last entry, Phrixus and I approached the line - his orange pan as shiny as ever, and me sporting a solid smile as I stared down the red light; waiting for it to change to green.

The weather in the Hochsauerland district had been riddled with a massive amount of hoarfrost for our entire visit. While beautiful and magical looking it also insisted on blanketing everything. Everything! The track though, was well-maintained and for the most part, we had been given a good preview of what we could expect for race day.

Run 1, Head Coach Ivo placed my sled in the start groove and I dug my spikes into the ice to get us moving. My start unfortunately didn't have the technical soundness required for a sticky groove, and the time reflected this - but I made sure my drive was fairly sound. Just the same, the downtime wasn't what I had been chasing and I crossed the line in a time that would place me mid-pack.

Returning to my sled during parc-ferme, I discovered a decent-sized scratch on my right runner. And while I can't say for sure where I picked it up, I can say no scratch is a fast scratch. As such, I requested my allotted tiny piece of sandpaper. The FIBT official informed me I was not to use it outside his dictated area and then proceeded to watch me like a hawk. He was so interested in my work that he went as far as to ask me if I was done yet, twice! His second inquiry must have illicit a specific look on my face because he quickly went to watch someone else fix a ding. I got out as much as I could, re-checked/set the rock on my sled and walked out of the fenced off area.

I recognized that I had done a bunch of things right Run 1. Thus, my plan for Run 2 was simple: find more in the push and let my sled go. "Letting it fly" as we refer to it, has never been a huge problem for me in the past ... but things have been very different since last year and it would be naive of me to proceed without recognizing my struggles both on and off the ice have played a part.

The ability and skill of truly relaxing on the sled is a massive part of success for a Skeleton Racer. Now, I'm not just talking about exhaling and holding on relaxed, I mean slack jaw, forehead soft, shoulders melting, a butt and legs like jello relaxed! And all this has to happen after you've demanded 100% energy and power as you push your steel and fibreglass tea-tray of a sled along a sheet of ice as you descend upon a mountain.


My name was called as the track was cleared. The push went much better. (It ended up being a Personal Best) I felt power in my feet, drive in my legs. The drive also cleaned up more - and I felt Phrixus pick up speed. I crossed the line with a much better downtime. I had to be pleased - and I was. It was just frustrating that my combined time had too much lost in it to climb more than one spot.

Truthfully, all week long my speeds were solid. All week long I made the necessary corrections, I watched sleds; I practiced and re-practiced timing but the frustrating pattern re-emerged: all the small, perfecting elements just didn't line up.

Last time I raced in Winterberg, GER - things went like THIS. I was close to a podium in the WC race, and won a Gold in the Team Race. I made mistakes, and I learned from them.

This time around, although I want to delete each and every word off the screen as I type it, Bobbahn Winterberg offered me no medal but replaced it with more lessons.

So while I am ALWAYS thankful for the ability to walk away from each experience and each race situation better off - I have to ask, Anyone feeling like we've had enough "lessons" for a little while?

Yeah, I give each and every one of you the creative freedom to imagine me raising my hand, because I am.
The week following Winterberg, the World Cup season kicked off in Lake Placid, NY and it was the first time in two years that I haven't been there with the team. I won't pretend otherwise - it was a tough pill to swallow.
That being said, I watched the live feed online and cheered as Canada had some solid results in New York. I was very proud of our teams:  Canada's Elisabeth Vathje wins Silver in World Cup Skeleton
The reality is, despite my occasional impatience with all the lessons, I am acutely aware of the opportunities that are manifesting as this season progresses. I sincerely believe that the best views come after the hardest climbs ... and I've always been a great climber.

Soon thereafter the World Cup circuit arrived in Calgary. I was very anxious to finally get a chance to catch up with all my international friends (Skeleton and Bobsleigh) whom I hadn't had a chance to see since before the Olympics.

There were stories to share and congratulations in order. It was so fantastic to get all the long overdue hugs and warm wishes from the sliders that I continue to grow and develop alongside. It was also really great to get a chance to slide on the super-slick WC ice that the crew in Calgary was creating for the race.

It had been awhile since I was sent down first before the racers to test the groove, ice conditions, and timing eyes but it was an opportunity I was glad to get. Phrixus and I are still getting reacquainted and with more races to attack during the remaining 2014/ 2015 season there is much work to be done.

Forerunning was fun. It was focused but relaxed; exactly the kind of head space I needed to get myself back into. My teammates and I proudly represented our country as we lead the way over and over again and then returned to the top to cheer our Canadians on in their push.

Once again, race results were great and I'm so thrilled to be a part of the team who is proving that Canadian Skeleton has potential and will continue to push forward through to 2018! Elisabeth Vathje wins 1st Skeleton World Cup Gold.

To say that this past year was hard, is a gross understatement - adding in a few less than stellar results to date has made this pursuit feel even more challenging, but I am not about to give up.

Giving up couldn't be further from my thoughts ...

Only a fool confuses fate with destiny.
Fate is what happens to us.
Destiny is what we make happen in spite of our fate.